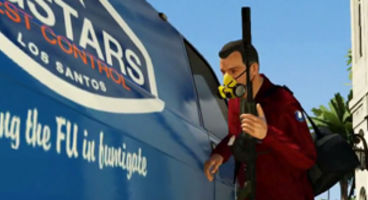 Rockstar Games know how to a market a game, which is mostly by just keeping their trap shut. Internet 'detectives' reckon they've unravelled the mystery of GTA V's lead character.

They point their accusatory casting finger at actor Ned Luke, for the role of 'Albert De Silva'. Fans believe his voice and likeness match the GTA V trailer. What does Twitter say?

He added: "Grand Theft Auto V trailer with Ned Luke our homey as the LEAD!" It wasn't too long though before Taenaka started to back pedal a little on what he was twittering, teasing: "it's not official but I know that voice and look #NedLuke He is bigger & badder than Statham... lookout."

"GTA 5 playaz across the globe! I just recognized the voice & profile -that's all I can say respectfully. I am looking forward to GTA 5 :-)" Taenaka communicated recently, pointing to reports of Ned Luke. The actor's IMDB listing has Grand Theft Auto V attached but those records have lied before. Can Ned Luke be our mystery GTA V trailer narrator?