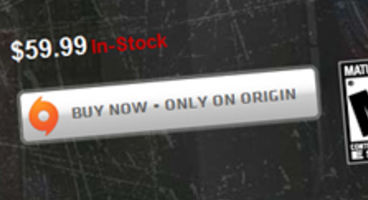 GameFront received a statement from Electronic Arts denying that they pulled Crysis 2 from Steam, despite the button stating "only on Origin". Rather, this seems connected to the game's ability to sell content from within itself.

The official response from EA reads:

It’s unfortunate that Steam has removed Crysis 2 from their service. This was not an EA decision or the result of any action by EA.

Steam has imposed a set of business terms for developers hoping to sell content on that service – many of which are not imposed by other online game services. Unfortunately, Crytek has an agreement with another download service which violates the new rules from Steam and resulted in its expulsion of Crysis 2 from Steam.

Contrary to reports, Crysis 2 is available digitally from other online retailers such as GameStop and Amazon.