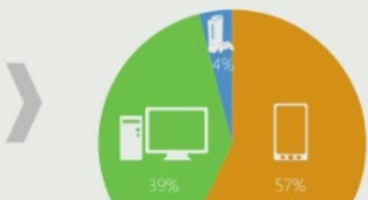 The Worldwide Partner Conference held by Microsoft on Tuesday mentioned a "single ecosystem" for PCs, phones, tablets, consoles and even TV.

The idea is they'd share 'core technologies' so they'll "all come together." This keynote adds credence to the 'Xbox 360 on PC' rumour flying around.

"You can have full PC compute power available in whatever form factor you like," said Microsoft's Andy Lees. "We won’t have an ecosystem for PCs, and one for phones, and one for tablets — they’ll all come together.”

The giant will provide "coherence and consistency" across the devices, "particularly with Xbox," and the goal is more than just harmonising UI but also core technology like Internet Explorer and other staple applications and features.

Sources say Microsoft intends on 'bridging' the Xbox 360 operating system with PC within the next four years, which times nicely with the end of the console's 10-year lifecycle and the expected 3 year run of Windows 8. The next OS will be multi-platform?

Check out the write up from This is My Next... to learn more.