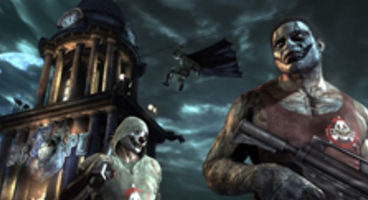 Delightful news for PC gamers as it has been confirmed that Nvidia's 3D Vision and PhysX technologies are both fully support in Batman: Arkham City.

The 3D effects "really stand out" as you swoop around Arkham City, reports PC Gamer. The PhysX meanwhile has a "not-so-subtle" presence throughout.

Fancy stereoscopic 3D and PhysX loveliness are yours to have if you've got sufficient bulging biceps attached to your PC rig.

"For the last trick, I'm given a pair of Nvidia 3D Vision glasses. Thanks to the high-altitude gliding and swinging, the depth effects of 3D really stand out in Arkham City, though it does make a dark game look that much darker," said the magazine, PC Gamer.

"If you've already invested in a 3D monitor and a beefy Nvidia GPU, playing this game will make you glad you did." However 3D isn't the only major eye catching feature of Batman: Arkham City on PC as it uses PhysX as well if you switch it on.

During a courthouse battle, "the not-so-subtle PhysX enhancement causes a wooden wall to splinter as inmates are flung against it," they reported.

It looks like our Dark Knight starts using the environment as part of his free-flow combat by default too. "If you happen to be near a wall or rail, Batman transforms it into an instrument of justice by slamming a goon against it." Rocksteady look to have another winner.