Guardian Heroes 2 planned, "core mechanics will be the same" 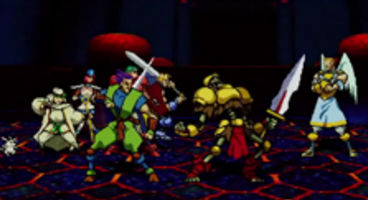 Developer Treasure plans a sequel to Guardian Heroes, but publisher SEGA first wants to "revitalize the IP" meaning they have to work on an XBLA remake.

The side-scrolling developer promised it's "core mechanics" will remain unchanged although they "may create " characters and backdrops in 3D. It's out October.

The success of the Guardian Heroes remake for Xbox Live Arcade this October will decide whether a sequel gets green lit. Treasure has remade Radiant Silvergun for XBLA too and it releases on the service this week. Guardian Heroes was a SEGA Saturn notable.

"The project started as Guardian Heroes 2, but the publisher - that's SEGA - said in order to create a sequel, they wanted us to revitalize the IP. So instead of starting on the sequel we made a remake," he explained.

"The original core game mechanics is a 2D, layer-based game," continued Matsuura-san, "and that's what we like about it. We may create characters and backgrounds in 3D, but the core mechanics will be the same." Do you hope for Guardian Heroes 2?