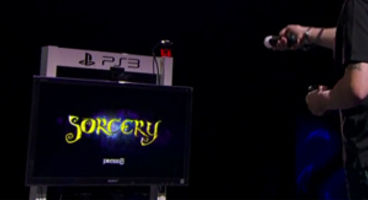 Sony's Eric Levine has affirmed that PlayStation 3 title Sorcery, designed for PlayStation Move and shown at E3 2010, is still very much alive. More information is due soon.

In fact Sorcery will be "fully playable" at the Sony Holiday Showcase this December in New York City. They'll be giving hands-on time for the very first time in its development.

Sorcery was showcased at E3 2010 as a promising exclusive title for PlayStation Move but then fell into silence, with speculation that it had been shelved for a time, or permanently.

"Yes, Sorcery is still in development and we're very excited to show everyone how this PlayStation Move exclusive game is coming along," Sony's Eric Levine told IGN. Next month in New York City will be Sony's Holiday Showcase and it'll have plenty of Sorcery for all to enjoy. It uses Move as a wand to cast spells. Watch the E3 2010 debut below.