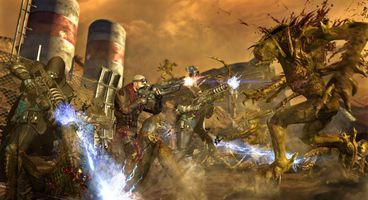 PC version of Red Faction: Armageddon.
Volition isn't as worried about piracy on the PC as they are making good games for it, taking the stance, "Let's make a game that's worth stealing, and then we'll worry about making sure they don't." Saints Row: The Third and Red Faction: Armageddon are the developer's two major titles coming this year, and Volition has made sure to develop the PC version in-house.

Volition learned their lesson when the PC versions of both Saints Row 2 and Red Faction: Guerrilla were less than satisfactory in terms of graphics and stability. The same is definitely not true of the new games. Volition studio manager Eric Barker bragged, "You should see (the PC version of Red Faction: Armageddon), it looks absolutely beautiful. If you've got a great graphics card it looks fantastic. We definitely believe PC games are great and if they're done right and done well by a studio, they're phenomenal.

"There's a lot of debate and discussion. I can't predict the future, but I'm really happy with how Red Faction: Armageddon looks on PC. It's beautiful."

"I don't think (piracy) is something at the forefront for us," Barker added. "First and foremost, we want to make sure we're making a game people would want to pirate. Let's make a game that's worth stealing, and then we'll worry about making sure they don't."