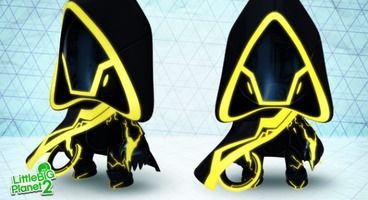 Sony and Media Molecule are reporting that as of this past Friday, April 15, there have been 4,141,742 custom levels for LittleBigPlanet and LittleBigPlanet 2 uploaded by gamers using the LBP editing tools. Of the 4 million maps, even if a tenth of a percent of them were good, that would mean 4,000 good maps were available.

Media Molecule thanked fans: "For us the most exciting thing has always been seeing what the community does with a LittleBigPlanet game when they get their hands on the new features and tools. We’re constantly delighted – and amazed – by their ingenuity and creativity, and it’s so inspiring to see the level of affection that exists for LittleBigPlanet amongst fans around the world."

Sony PR flak Eric Levine dropped teases for the next two DLC offerings for LittleBigPlanet 2, including the Tron pack (as seen to the left) which comes out on April 26th for $2.99.