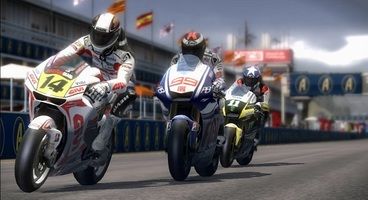 Capcom has announced the latest edition of the popular motocycle racing series, MotoGP 10/11 will be coming out this coming March 2011 for PlayStation 3 and Xbox 360.

According to Capcom, MotoGP 10/11 will include all of the content from the past 2010 MotoGP season and offer downloadable updates for the 2011 MotoGP championship as it goes on.

The game will improve the already top notch handling system and physics, and add a customizable player assist feature to allow both hardcore and casual racing. High realism will satisfy the gearheads who love to tweak their rides, while casual motorcycle enthusiasts can go with a more arcade racing style. Players who know their cycles can even turn off all assists including the hud and just race through pure feel.

MotoGP 10/11 will include a new co-op option for career mode, allowing other players to hop into a friend's career mode and race with them as a team. The game will also have the usual Championship and Time Trial modes, as well as a revised Challenge mode. As for online play, up to 20 racers can compete at once in online races.

Let us know if you're hot for the new MotoGP.