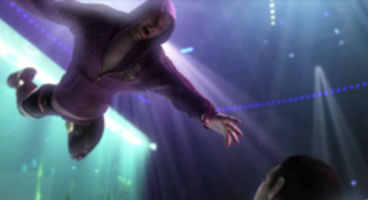 Sasha Grey, who starred in TV show Entourage, will be playing the role of Viola DeWynter and presumably her twin sister Kiki. "Through Viola and Kiki’s savvy, if not ruthless business sense, the Syndicate’s profits have increased ten-fold in Steelport."

Hulk Hogan will be flexing his mighty vocal cord biceps to play Angel De LaMuerte a professional wrestler who gets betrayed by his former tag-team buddy, Killbane, "now the merciless leader of the Lucadores street gang, Angel teams with the Saints to take over Steelport, and exact his own brand of violent revenge."

Daniel Dae Kim, ex-Lost star, reprises his role as Johnny Gat, "chief lieutenant of the Third Street Saints and your right-hand in Saints Row: The Third. Now an international celebrity, Gat is the epitome of high-class crime as he licenses his likeness to Saints clothing lines, Saints energy drinks, and even the classiest ride in Steelport, the Johnny Gat-mobile."

As an added treat both Sasha Grey and Hulk Hogan will be attending ComicCon in San Diego "signing autographs on Thursday, July 21 at the Saints Row Booth, #5145." They'll be at the "Saints Row media event at the FLOAT rooftop bar at the Hard Rock Hotel at 7:00 p.m. in partnership with IGN. The event is by invitation only, and it will be awesome."