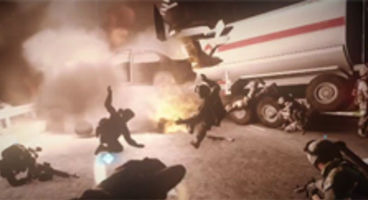 DICE series producer Patrick Bach for Battlefield has said without the optional installation of the texture pack with Battlefield 3, it will look 'standard-def'.

There's no mandatory install for the Xbox 360 version, because some are "without a hard drive." DICE always try to "push the limits" of hardware.

"The thing with the 360 is that you need to be able to give consumers a game where you don’t have to install it on a hard drive, because there are 360s without a hard drive,” explained producer Patrick Bach. The higher resolution textures are optional.

"So we need to give you the option of installing it, rather than just demanding it. You could call it a ‘standard-def’ version for the 360 if you don’t have a hard-drive.”

“We’re really trying to push the limits of what we can do on the consoles and the PC. Our goal is to see how we can utilise as many of the systems that you actually have in your machine that some people haven’t utilised before,” continued Bach.

"Some just do it like, if it doesn’t fit into memory we just make a lesser game. We don’t do that. For us, it’s about how we can give you the most game ever even though the hardware is over five years old.” Battlefield 3 releases next week on all platforms.

Are you buying a console version of Battlefield 3, or is it a must for PC?