DICE: Battlelog result of "grabbing the good pieces" from others 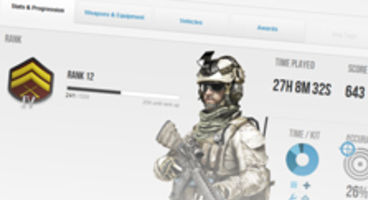 Battlelog producer Frederick Loving at DICE says he "looked at all social networks" like Facebook, MySpace, LinkedIn and others to build Battlelog.

It was inspirational to find out "what other people do" and then only grab the "good pieces out of it," said Loving. The social networks are "all pretty common".

Battlelog is the new stat tracking and social platform for DICE's Battlefield series, starting with Battlefield 3 releasing next week.

"I looked at all social networks from Facebook, MySpace, LinkedIn, too of course Waypoint and Elite. We looked at everything," said Battlelog producer Frederick Loving. The last two are of course Halo Waypoint and Call of Duty Elite.

"That’s inspirational for me just finding out what other people do and just sort of grabbing the good pieces out of it," he continued. While there are many social networks out there they share the same principles. "Of course we’re inspired by a lot of the social networks that are out there and they’re all pretty common if you look at them," he said.

Are you looking to this new level of brag social integration?