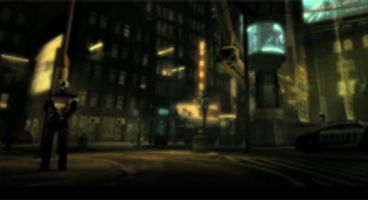 You can't have an ESRB rated Mature game without some "large sprays of blood" staining the level can you? No. Deus Ex: Human Revolution doesn't skimp on it.

It summarises that firefights are "highlighted" by screams, realistic gunfire, explosions and blood sprays. There's civilian slaying, booze and hookers!

Eidos Montreal is making Deus Ex: Human Revolution which suffered a leaked beta version meant for the press, but the studio has since 'embraced' the leaked preview build and welcomed feedback from users on their official forums.

"Firefights are highlighted by screams of pain, realistic gunfire, explosions, and large sprays of blood that stain the surrounding environment," read the ESRB rating page.

"Civilians can also be killed directly, though this may negatively affect players' progress. As the game progresses, alcoholic beverages (e.g., beer, vodka, cocktails) can be purchased and consumed to reduce damage, resulting in a screen-blurring effect."

There's also some "dialogue with prostitutes" lurking on the streets. Overall it's rated M for Mature because of "Blood, Drug Reference, Intense Violence, Sexual Themes, Strong Language, Use of Alcohol". The UK's BBFC gave it a 15 certificate.