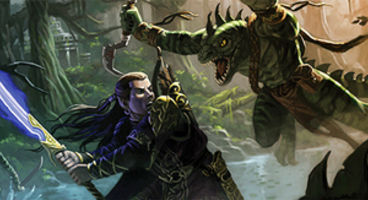 They describe it as a "hybrid sandbox/theme park-style MMO" where players control the economy, crafting items and even "full-fledged kingdoms" that demand resources.

The MMO project at new start up Goblinworks is said to be in the very early stages. It promises to feature highly customisable character creation - which is a must for Dungeons & Dragons.

"Pathfinder Online’s robust trading system puts players in control of the world’s economy with player-created items, consumables, fortifications, and settlements. Character-controlled settlements can grow into full-fledged kingdoms that compete for resources as they seek to become the dominant force in the land, raising vast armies to hold their territory against the depredations of monstrous creatures, NPC factions, and other player characters."

Creating new societies has an impact: "Social organizations scale from small parties of a few adventurers to player nations inhabited by thousands. As settlements develop, the surrounding wilderness develops more complex and challenging features, including randomly generated encounters and resources as well as exciting scripted adventures.”

To learn more check out the official Goblinworks website for Pathfinder information.