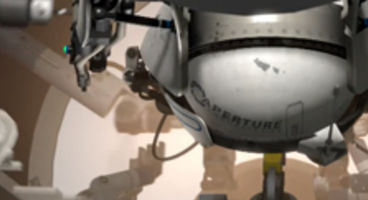 Valve scribe Chet Falliszek has revealed the Portal 2 team has created not one but two end credit sequences for the game; singleplayer and co-op.

Each carries a surprise. Portal 2 "doesn't get too difficult" that you'll need to fire up YouTube to see them he promises. Valve wants us to reach them.

"...we’ve got two credits,” revealed Chet Falliszek of Valve. "So we had to do something twice as amazing.” Each of the end credits carries a unique treat for Portal fans.

"The cool thing is that we’ll make sure that the game doesn’t get too difficult. It’s more complex, but it’s never so difficult that you can’t solve it. You’ll get to the endings. We’d hate to think that people would only watch the endings on YouTube," he continued.

“It’s scary actually – the ending to Portal has over 5 million hits on YouTube.” Valve has also announced that Portal 2's PC-only mod tools will be able to create things for the Xbox 360 and PS3 versions of the game. Steamworks will distribute mods via PS3.