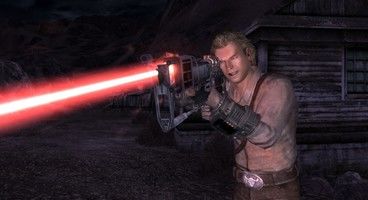 While Lonesome Road is the last of the major, plot-driven DLC, Bethesda has announced new downloadable content for Fallout: New Vegas that basically just adds some weapons and perks, called the "Gun Runner's Arsenal" DLC pack.

The DLC contains the following, according to project director Josh Sawyer:

Mad Bomber (Perk) - Specialized training is now available for wastelanders with a talent for Repair and a love of Explosives. Learn how to get the most of your Powder Charges, Bottlecap Mines, and Time Bombs! Love Mini-Nukes but hate carrying around a Fat Man? Slap on a Sensor Module and make a Fat Mine! Want to find another use for those heavy Microfusion Cells? With a bit of Scrap Electronics and some know-how, you’ll be hurling MFC Grenades and MFC Clusters in no time! Crafting humble Tin Grenades and even devastating Nuka-Grenades are a snap with this handy perk.

Tin Grenade, Fat Mine - Two ends of the Mad Bomber spectrum, similar purposes: blowing things up. A Tin Grenade is one of the simplest recipes we’ve seen. Take some ordinary Pistol Powder, a Tin Can, and some Duct Tape. Wrap them up (you put the Pistol Powder into the can, we’re told) and you’ve got a cheap, low-power grenade. How does it detonate? Don’t ask us. If you like the explosions generated by Mini-Nukes (who doesn’t? we don’t want to know them) but don’t like carrying around a Fat Man, you can use some Scrap Metal, Scrap Electronics, and Sensor Module to turn that Mini-Nuke into a Fat Mine. Same explosion, different detonation technique. Warning: be careful about planting these on folks — for reasons we hope are obvious.

Nuka-Grenade - This East Coast special has finally reached the shores of Lake Mead via some impressive and inventive Mad Bombers. Just take some Nuka-Cola Quartz, a Tin Can, some Abraxo, and a bit of Turpentine, and you’ve got a grenade that puts “ordinary” plasma to shame. We’re starting to wonder how people kept this stuff in their homes without leveling entire city blocks, but that’s science for you.

Optimized Small Energy Cell, Micro Fusion Cell, Electron Charge Pack, and Flamer Fuel - Though we specialize in guns, we’re more than aware of the common complaints about energy weapons: ”My Laser Pistol doesn’t pack enough of a punch!” “The ammo’s too heavy!” “Max Charge ammo eats through my Tesla Cannon like a Glowing Ghoul at a Radroach buffet.” The Gun Runners don’t have the cure, but if you’ve got the talent, scientist, heal thyself. Optimized Energy Weapon ammo: 30% more damage, superior armor penetration, and they even weigh less. The only drawback is a slight increase in weapon degradation. Requires Vigilant Recycler.

GRA Laser Pistol, Plasma Pistol - Never let it be said that the Gun Runners are snobs. We’ve worked on some distribution deals for customizable low-end Energy Weapons. Don’t let the “low-end” designation fool you. With new mods, these weapons can be potent against a surprisingly wide range of foes. The Laser Pistol’s Combat Sights make the weapon much more user friendly. The Focus Optics customization boosts damage. On the other end of the (visible) spectrum (heh), the Plasma Pistol’s High-Energy Ionizer elevates its already impressive damage into the steel-melting range. A Magnetic Accelerator addresses the traditionally slow projectile speed. Recycler mods, to lower operating costs, are available for both weapons.

Cleansing Flame, MF Hyperbreeder Alpha - Two more one-of-a-kind (until we hear otherwise) Energy Weapons for clients who are interested in those things. Cleansing Flame is a high capacity Flamer with superior base damage, longer range, and a burn effect that improves with the user’s skill. An Energy Weapons expert is absolutely devastating with this monster! The MF Hyperbreeder Alpha is a unique Recharger Pistol that’s been hotwired for automatic fire. A previous owner heavily modified the internal breeder reactor for a rapid recharge rate, making this quite handy for anyone who doesn’t like to carry around a lot of ammo. 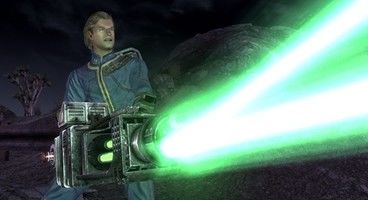 Sprtel-Wood 9700, The Smitty Special - If you forced the Gun Runners to use an Energy Weapon, we’d pick an automatic every time. We’ve got a line on two ultra-high-end unique models for our more well-to-do clients. The Sprtel-Wood 9700 is a devastating high-speed Gatling Laser. It has a small ammo capacity, but its incredible accuracy and elevated damage mean that armor isn’t much of a defense. Load it with Optimized Electron Charge Packs to generate an unstoppable stream of laser power! The Smitty Special is named in honor of a legendary Boneyard weapon builder who produced beautiful plasma weapons with a high rate of fire. This Plasma Caster features an array of dizzying modifications that produce an almost constant stream of plasma bolts. ”Waaah, waaah, but it does so much less damage than a regular Plasma Caster!” Go back and read that again: it’s an automatic Plasma Caster. Even with the reduced damage, it will punch through almost any armor it comes up against.

Sleepytyme, GRA 12.7mm SMG - The 10mm SMG has a proud history in the wasteland, and this one-of-kind custom model, Sleepytyme, continues that tradition of excellence. With an integrated suppressor/compensator, it’s accurate and deathly quiet. Internal modifications boost damage and slightly elevate the rate of fire, turning this into a covert powerhouse. For customers with an interest in heavier ordnance, we also have a customizable GRA 12.7mm SMG Available modifications include a Laser Sight (decreases spread), Stacked Magazine (increases ammo capacity), and the always-popular Silencer (GRA variant required). 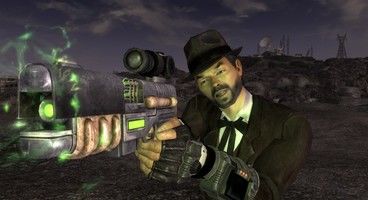 .50MG Explosive - High caliber ordnance for our high caliber clients. Available now at select dealers, this terrifying round produces a secondary blast after driving into its target. Recommended uses: Deathclaw Mothers amidst their young, Brotherhood Paladins surrounded by Scribes, or a particularly annoying pack of Geckos. Bring your piggy bank: MSRP is 40 caps per round.

20 Ga. 3/0 Buck, 12 Ga. 4/0 Buck - Shotguns: you love them, we love them. But sometimes, ordinary buckshot doesn’t get the job done when the Vipers come knocking in a suit of metal armor. Sure, you could bust out the slugs, but the Gun Runners have some more options: 20 Gauge 3/0 Buck and 12 Ga. 4/0 Buck. Fewer pieces of shot, but they’re bigger and heavier. Still not enough? Fine, take the Hand Loader perk and craft some Magnum variants.

20 Ga. and 12. Ga Pulse Slugs - When you’re fighting robots, slugs are helpful for punching through armor. You know what’s even better? Pulse Slugs. That’s right. In addition to a love tap from the lump of metal slamming into their Combat Inhibitor, they get an extra kick from an Electromagnetic Pulse triggered by the impact. As accurate as a regular slug, but with a little less “oomf”.

GRA 5.56mm Pistol, GRA Battle Rifle - The Gun Runners have a new run of two of the most popular models we’ve seen. The first are our faithful reproductions of “that gun” — you know the one we’re talking about, the jury-rigged .223 that came out of the Hub way back when. Our repros work with .223 and 5.56mm ammo of all flavors. Accurate, hit like a mad Brahmin, and they even make that “cool” sound when you reload. Our refurbished Battle Rifles are true classics, going back way before the Great War. Any semi-auto capable of pumping out eight shots of .308 with dependable accuracy is a keeper in our book. What book? The Big Gun Runners Book of Death, smart guy. This one makes a cool reloading sound too. The rifle, not the book.

The DLC will be released in the next few days on Steam, Xbox Live Marketplace and PlayStation Network, but has not yet been priced.