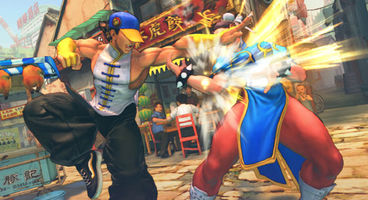 Capcom released the following explanation for the DRM:

Now, on the security side of things, SFIV unfortunately was plagued by pirates and hackers that messed up leaderboards. To hopefully remedy that, SSFIV:AE will be making use of what is called SSA technology (similar to what we used in Dead Rising 2). Like Xbox Live, players will sign in when they launch the game. You must have a Games for Windows Live account (which is free) in order to get full access to the title. If you already have an Xbox Live silver or gold account, those would work too and your achievements would be added/displayed in your usual gamescore.

Inevitably the question is: if you happen to temporarily lose your connection in the middle of your session (let’s say you’re working on combos in the training room or working on challenges), no problem. You’ll be able to keep doing what you’re doing until you come to a logical break point, like exiting to a menu, at which point you’ll be asked to sign back in. Assuming your PC is back online, everything will continue as it should, just like on Xbox 360.

If you aren’t signed in to an online GFWL profile, the offline mode has limited functionality. Obviously there’s no online play, access to replay channels or other online-centric features (and this is the part that keeps the online play secure from hackers or pirates). Additionally, you won’t be able to save any progress in challenges or settings, won’t have access to any DLC you’ve purchased and all local play will be restricted to 15 of the 39 characters.

To answer a few other questions before they get asked:

There are no installation limits. The game is tied to the user account with the SSA mechanism. You can install it a zillion times and as long as you’re logged in on the associated account, you’re good to go.

Yes there is DLC supported. All of the costume packs from the console versions, going back to the original SFIV, will be made available via Games for Windows Live Marketplace. There is a caveat though: Steam users will not be using GFWL Marketplace to obtain DLC. We’ll provide more details on that wrinkle at a later date.

The GFWL services and functionality is the same regardless of whether you buy a physical disc or download via a digital delivery service. There is no other form of DRM on retail copies or most digital outlets. Steam and Impulse will be enabled to make use of their respective security solutions in addition to SSA.

It's unfortunate, since the PC version of Street Fighter IV was by far the best implementation of the game.