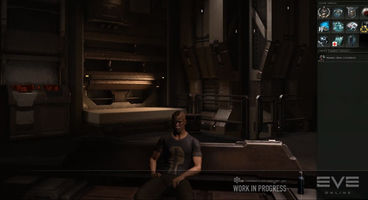 Captain's Quarters.
A full blown controversy has hit the space combat MMO EVE Online, as members are angry at the developer CCP's new microtransactions in the game.

An article titled "Greed Is Good" released internal documents from CCP, regarding the direction the MMO is taking. They were not pleased with the forced graphics upgrade ("The ones with a decent enough system to run the new graphics met the game’s new features and a clothing store that managed to rage players to levels even higher than their GPU temperature loads.") nor with the microtransaction prices of items like monocles, which cost more than a fully outfitted battleship.

The article's leaked internal memo from CCP was confirmedauthentic by MMORPG site Massively, which indicated that CCP may go back on the promise to not allow microtransactions to impact gameplay, a part of it stating, "Not all virtual purchases will focus on customization: some will simply be new items, ammunition, ships, etc. that can be purchased outright."

A forum post by the developer to discuss the issues has already exceeded 200 pages. Check it out here.