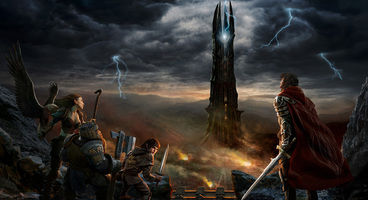 Warner Bros. Interactive has announced that the first official expansion to The Lords of the Ring Online since the MMO went free-to-play has been released. Rise of Isengard takes gamers to the realm of the corrupted wizard Saruman and his legion of orcs, the Uruk-hai.

Isengard is described as "where ancient forests once flourished" and is now "a corrupted waste of metal and wheels." Players will walk in the shadows of the tower of Orthanc to "forge ahead into these devastated lands and uncover new quests, skills, and traits as you strive to thwart Saruman’s ambition."

“We’re very excited to launch the first major expansion to LOTRO since going free-to-play,” said developer Turbine's senior producer Aaron Campbell, “We can’t wait for players to continue their adventures through Middle-earth and engage with epic locations such as Orthanc and iconic characters such as Saruman and Grima Wormtongue. We’re seeing tremendous excitement from our players as Rise of Isengard is already LOTRO’s best selling expansion ever!”

The bullet-list of features include, according to the press release:

- Dunland – Adventure amidst the bright forests in the foothills of the southern Misty Mountains. Beware the Dunland Clans, rugged warriors tempted by the dark promise of power.

- Gap of Rohan – Battle over the legendary pass between Eriador and the plane of Rohan. This key strategic point must be defended against the ambitions of Sauron.