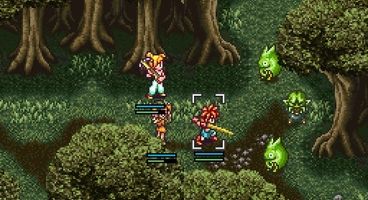 The DS version.
One of the best JPGs in the past twenty years, Chrono Trigger, will be hitting the PlayStation Network on October 4, Sony has announced on the official blog.

The game, originally launched on the Super NES back in 1995, is best known not for the addictive gameplay or memorable characters, but for being the first game produced by Square's "Dream Team" of Japanese RPG personalities: Chrono Trigger's development team included three designers that Square dubbed the "Dream Team": Hironobu Sakaguchi, the creator the Final Fantasy series, Yuji Horii, creator of the Dragon Quest series, and Akira Toriyama, best known for being the artist of Dragon Ball. Kazuhiko Aoki produced the game, Masato Kato wrote most of the plot, and composed by Yasunori Mitsuda, with some of the score by Final Fantasy composer Nobuo Uematsu.

The game has seen numerous re-releases, including the Nintendo DS and Virtual Console. This is the first time the game is appearing on Sony's platform since it was released on the PSOne.