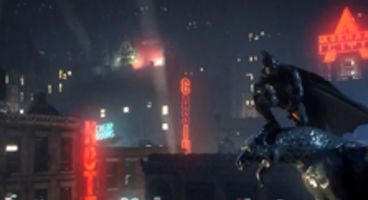 Rocksteady says that Batman: Arkham City has "80% of the game" taking place on the streets, with interiors "locked to specific missions" we undertake.

This means we can "just start exploring" once the game fires up, but narrative is paramount. It's a "large world" and the team is 97 strong to "fill it with content".

PSM3 magazine has a four-page spread for their Batman: Arkham City preview piece. There'll be hardly as much constant travelling between interiors as in Arkham Asylum.

"Interiors are locked to specific missions, but 80% of the game takes place on the streets," said Rocksteady's Dax Ginn. "This means you can begin the game and just start exploring," he added, but "plot is really important to us."

"Our objective was not to make a bigger game world just for the sake of it. We want to fill it with content, and there's no better world than Batman's universe to take inspiration from." Fans and critics agree that Batman: Arkham Asylum exploded the bar for quality.

"We have 97 people on the team, compared to 65 on the first game. Because we've decided to make such a large world we had to bring in more artists, animators and so on. It's been a pretty huge technical and creative undertaking for the team."