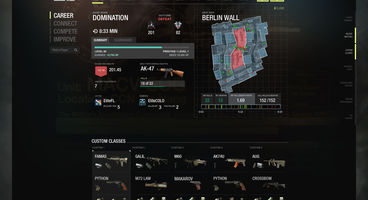 Activision's controversial Call of Duty: Elite feature was unveiled today, featuring both free and subscription-based features for multiplayer gameplay. Elite is a website based service that is basically the Call of Duty version of Bungie.net, though an iOS and Android app is planned as well.

There are five parts to Elite. Career tracks a Call of Duty player's stats from a PC or console and displaying them on multiple pages of the Elite site. Aside from the detailed stats, the Career page also features a level calculator which allows players to input the number of hours of CoD they play each day in order to see how many days it will take them to Prestige. The Career will also point fine details of a player's performance in a match, showing them just where they received their kills or were killed on the map and a timeline of the kills/killed, as well as the weapons involved and so on.

The Connect mode allows players to contact each other through a Facebook messaging service, and utilizes Twitter as well. Connect also facilitates clan support by allowing the player to join up to 64 groups, which are identified by clan hashtags.

In Theater, players can also interactive with each other while hosting videos edited from game replays. The Theater will also read the meta-data of the Call of Duty videos uploaded to it and automatically tag each video with the names of the players in the captured match, allowing every player will easily know which videos they were in, intentionally or otherwise. 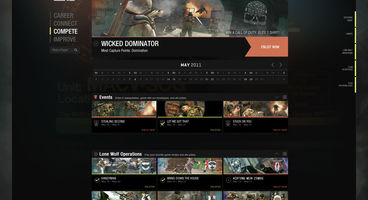 The biggest part of Elite is the Compete section, which includes such features as the Program Guide. In Compete's Events page, players will be able to see a list of upcoming challenges, whiich, for example, can involve uploading videos or screenshots that meet certain contest criteria. Lone Wolf Operations will challenge players to perform certain one-off feats in multiplayer like getting a set number of kills in a game mode that day. Successfully completing challenges can garner rewards for the gamer from an in-game badge to a real-life Jeep. The bigger Events will be weeks-long tournaments that are set up for CoD gamers at different levels of skill.

The Improve section is essentially a FAQ for Call of Duty multiplayer, which provides data about how weapons and attachments work, how maps are laid out, and so on.

It's not certain how the paid subscription will be implemented, though. Most of the previously mentioned features will be free, but certain portions will require a subscription. Jamie Berger, vice president of digital business at Activision, promised that "a premium Elite membership will give subscribers a constant flow of Call of Duty content, including map packs," which could mean that a subscription will allow CoD players to download DLC for free instead of paying more for the packs a la carte. Berger promises players won't be forced to pay for campaign, co-op or multiplayer.

We'll have more information when it comes regarding Elite.