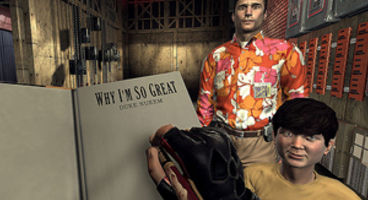 Jon St. Jon, the voice of gun-toting Duke Nukem, isn't a fan of firearms in his videogames and certainly not in real-life. The act of killing just to kill "just disturbs" the actor. Racing games over FPS, he says.

The "gratuitous violence" found in big titles like Grand Theft Auto turns Jon St. Jon right off. The iconic Duke Nukem is all for violence and big shooty guns, providing its against invading aliens.

"I don’t care for guns in general. It bothers me in this country how free we are to bear arms," actor Jon St. Jon told Unlimited Hyberbole in a podcast.

"They say ‘Guns don’t kill people, people kill people’ – well, no, I think people with guns kill people. Quite frankly I’d like to see stronger gun laws in this country," he continued. Just not when fighting aliens, presumably.

“So, you know, shooting and killing in games…Hell, I don’t even like hunting. Shooting deer or whatever? Unless they’re shooting it to survive and they use every part of the animal…the thought of killing just to kill just disturbs me.” Obviously not a fan of Cabelas Dangerous Hunts from Activision, but maybe he's picked up Criterion's Need for Speed?

“I like flying, racing, driving games more than first person shooters,” he added, “And gratuitous violence, like Grand Theft Auto? Not into those kind of games at all.” Naturally these statements may lead many to scoff as Jon St. Jon voices Duke Nukem, an icon of first-person shooters who loves a violent death-powered quip. Still we can get paid to do work that promotes what we hold values against, right? Sure we can. It's called freedom. 'Come Get Some'!