2011: A Year In FPS Disappointment

03 January 2012 | By PRBot
Well, so that was 2011 then, and here at the end of all things it’s customary to look back over the past 12 months and see how it all went. I remember chatting with some mates last December about the best FPS of 2010 and we struggled to think of one (eventually plumping for the flawed but atmospheric Metro 2033). Oh well, we thought, at least 2011’s looking pretty exciting so far. After playing or at least checking out all the FPSs this year however, the unifying theme of the FPS genre in 2011 has to be disappointment.

In some fashion every single FPS out this year hasn’t lived up to expectations, either from players or publishers (or both). Of course some of these titles had unfairly high expectations heaped upon them due to a massive amount of hype, meaning that okay FPSs wound up facing a severe public backlash. While this was the publishers’ fault for talking the talk but not having a game that could walk the walk, it’s still sad that otherwise good games got slated by consumers just because they didn’t live up to the unreasonable hype. 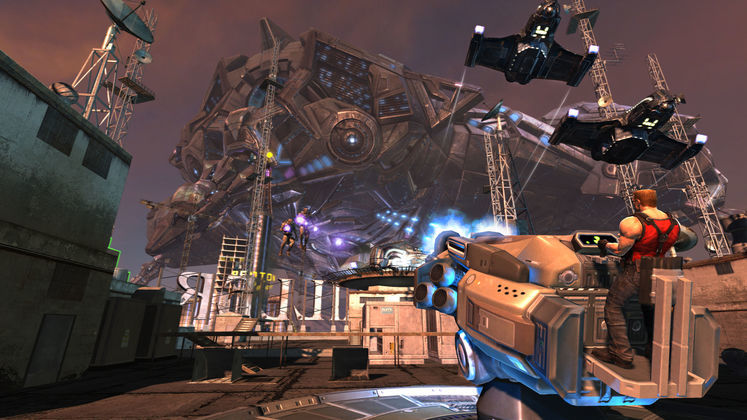 If disappointment has a name, it’s undoubtedly Duke Nukem Forever

The poster child for disappointment in 2011 was of course Duke Nukem Forever. While some people (myself included) managed to enjoy it a bit, the vast majority thought it was crap. Certain now-fired PR reps replying venomously to any bad reviews only solidified DNF’s infamy. Okay or shite, one thing’s for sure: it satisfied no one. The ill-advised leanings into Call of Duty/Halo health regeneration and weapon restriction annoyed the old-school shooter fans, the puzzles and slower moments annoyed the modern fans, the drab unrelatable environments annoyed the Duke 3D fans… and everything else just felt bolted together, unfunny, and (ironically) unfinished. 12 years of hype, disappointment all the way.

It wasn’t the only FPS with a long development time that arrived to a lukewarm response either. Id Software’s Rage took 8 years to make and arrived to even harsher scrutiny than DNF, mostly thanks to hype, id’s lineage and the incredibly pretty graphics engine. We weren’t the only ones disappointed, mostly since the solid shooter elements were hidden beneath a sub-par Borderlands/Fallout imitation. I personally enjoyed it… at least until the game abruptly stopped halfway through a mission, played a brief cutscene and turned on the credits. Oh, that’s all? I don’t even meet the main bad guy? Whatever. 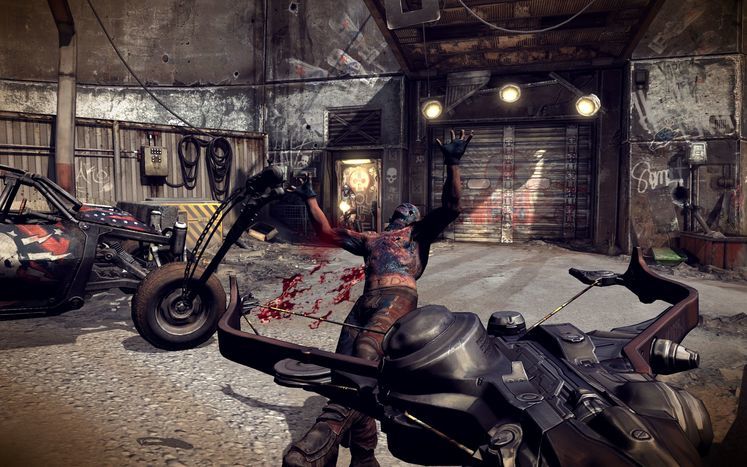 That was a theme in FPSs this year – non-existent endings. Crysis 2 was probably my favourite FPS this year, but after building to a big finale Alcatraz merely snuck past a couple of invisible aliens and the game just finished. We haven’t heard from Crysis since. Hard Reset, the PC-only FPS from developers who worked on Painkiller and The Witcher ,didn’t have time to build up the hype to be disappointed (being released two months after it was announced) but Flying Wild Hog still should've spent more time on it since it only felt like half a game. Now they’re releasing a retail “Extended Edition” with no word whether original game owners will get the new content.

Look publishers, I know DLC is all the (ahem) rage, but that’s no excuse to just give up in the middle of a plot. I can just about forgive, albeit through grinding teeth, a cliffhanger ending, but not the “walk down that hallway congratulations you have completed our great game here’s the credits” non-ending. To be fair, while I blame DLC as a reason for this swift kick to the menu, actually do you know how many FPSs had DLC that continued the game’s story this year? Only one: Duke Nukem Forever. If you’re going to evilly chop off the ending to sell to customers later, remember to actually do so. Tips For Greedy Publishers, #34.

Then we get to the COD-wannabes. Since the Call of Duty phenomenon shows no sign of slowing down despite all its creators walking out, every other publisher wants a piece of the still-growing pie. THQ’s Homefront was short, stifled, painfully on-rails, and had a merely okay multiplayer segment. Codemasters’ Operation Flashpoint: Red River took the former soldier simulation into a more confined, more Middle Eastern and more boring direction. EA’s Battlefield 3 had one of the most rippy-offy campaigns ever, trying to be COD so hard it hurt a fine series, and the various technical problems didn’t help. COD players want COD, everyone else wants something better, and recreating all the flaws and none of the fun doesn’t make for good business practice or gameplay. 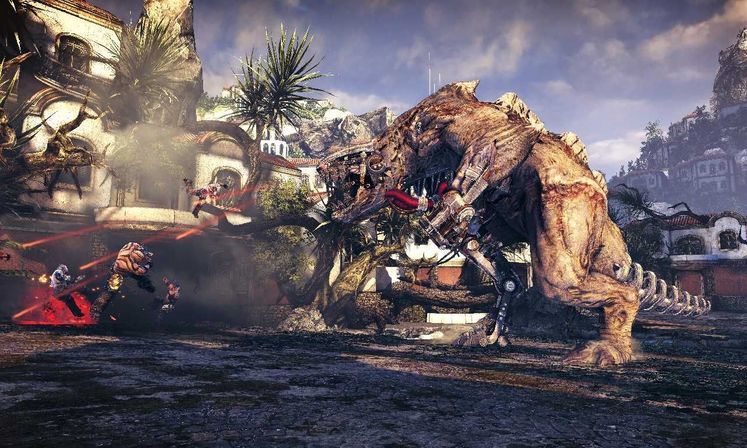 Bulletstorm has giant mechanical remote-controlled laser-chinned dinosaurs! How did this game not sell?!

Speaking of business, of course it wasn’t just gamers that were disappointed this year - publishers also felt the sting. Both of Sony’s big FPS exclusives, Resistance 3 and Killzone 3, failed to sell anywhere near as much as their predecessors. Both were fine games, but either through lack of hype or excitement over other games they’ve ended pretty much forgotten at this point. I haven’t seen any sales figures for Halo Anniversary so far, but with all the other games out this Christmas I frankly hope it didn’t do well.

The game whose poor sales really hit hard for me though was the fun Bulletstorm. An original and utterly insane shooter from Epic and Painkiller developer People Can Fly, it seemed a shoe-in for good sales – but they never came. Not enough of a long-term multiplayer draw perhaps, with an unconventional points-based mechanic to scare off the CODders. It was unique, it was original, and we all know how the world treats games like that.

Which brings us to the final game, for some the only game: Call of Duty: Modern Warfare 3, a.k.a. MW3, or “Mee Wee Three” as I like to call it. Whether it can be called a disappointment is entirely in the eye of the miseryguts. Haters will be disappointed that the skeleton crew left on Infinity Ward didn’t screw things up entirely, supporters will be disappointed that reviewers didn’t give it 10/10, Activision’s accountants will be disappointed that it only sold 6.5 million copies in the first week rather than 7.5, and EA… well, you can guess how envious EA is. Or THQ. Or Codemasters. Easier to pick holes in though is the paid-for social platform Call of Duty Elite, which wasn’t online successfully for MW3’s launch and has had so many problems Activision had to give a free month away to subscribers. 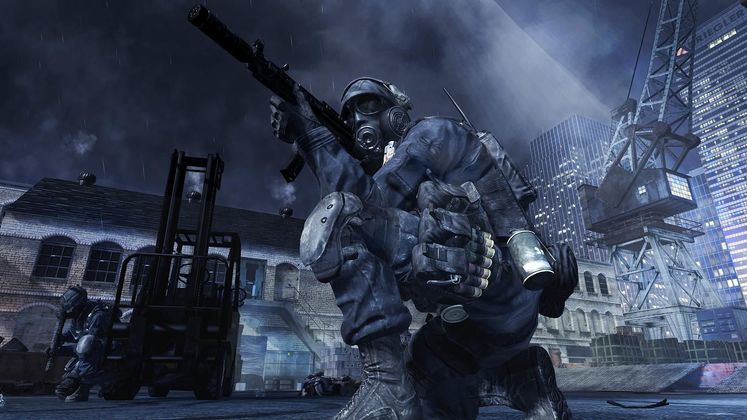 I'm disappointed and I didn't even buy the damn thing

So what can publishers learn from all this? I think the answer’s simple and twofold. Firstly, stop focusing so much on goddamned DLC. A few crappy multiplayer maps for £6 will not bring you new customers, since the first round of launch buyers already spread word around the digital campfire that your game was s**t. Secondly, don’t be so intent in beating Call of Duty at its own game – there’s already a yearly game for that franchise, players already have all the COD they can eat, so try catching something fresh instead. Oh, and if you’re going to spend more than 8 years making a game try not to cock it up.

As for us gamers, well, we should try and temper our enthusiasm. Cut through the marketing bollocks guys, just hope for a good game and we won’t be too disappointed when it’s inevitably not as amazing as we imagined it to be from the hype. Now then… doesn’t Bioshock Infinite look f***ing incredible?!