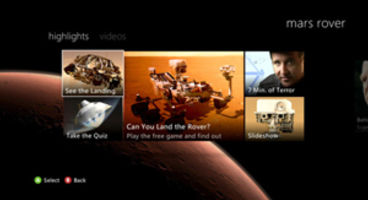 In just under 3 day's time the NASA landing of 'Curiosity' on Mars will be streamed live to those interested in leaps of mankind's solar accomplishments - it will be available over Xbox Live.

Why not give headshots and explosions a brief pause to see if those NASA eggheads can land another craft on the red planet? You can witness the "final moments before landing."

August 5th is the official date of the 'Curiosity' touch down on Mars. There's a special Mars Rover section on the Xbox 360 dashboard that you can't miss to celebrate the NASA mission.

"From here you can take a quiz about the mission, learn about the incredible engineering that has gone into the mission and much more. Plus, from her you’ll be able to join NASA TV live from Mission control at the JPL during the final moments before landing," announced Major Nelson.

There's a Kinect Mars Rover simulator title for free right now with achievements up for grabs. In the UK the live stream will begin around 6:31am BST on Monday, August 6th.