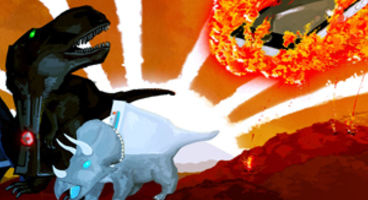 Codemasters co-founder David Darling, now CEO of Kwalee, has blogged a diatribe against physical media support saying it will cripple next-gen consoles because of price points.

He says the platform holders "need to sell games for $2" or risk losing to the likes of the App Store. Nintendo 3DS and PlayStation Vita "not currently competitive" with Android and iPhone.

Basically those retailers are holding the games industry hostage to high price points, which now threatens the future of studios and publishers reckons David Darling.

"If the next generation consoles have media drives like DVD to keep distributors and retailers happy so they can sell physical product this will make the machines uncompetitive. They will not be able to compete on price,” said Kwalee's Darling on his blog, stating that Microsoft and Sony "cannot let the retailers dictate game prices" anymore.

"The retailers will say to Sony and Microsoft ‘you can’t sell game X at retail for $60 and then sell it in your App Store for $2.’ However, console-makers will need to sell games for $2 or else they will not be competitive with Apple. Nintendo 3DS and Sony Vita are not currently competitive with iPhone and Android game prices.”

The drop in physical sales as opposed to the meteoric rise in digital backs his view, says Darling.

"Digital downloads give publishers instant access to a worldwide marketplace, while cutting out the expensive chain of production and distribution required by boxed games," he continued.

There are benefits to gamers too: "Developers can learn how to better look after their customers and provide exactly the experience they want. Players can play more games for free and pay just for the content that they want."

"Physical media like DVD is dying out and gaming is rapidly moving to digital distribution. If hardware manufacturers such as Sony and Microsoft do not manage this transition soon, they will be overtaken and left behind by companies who are embracing digital distribution wholly and completely. Companies like Apple and Google are not tied to brick and mortar retailers with shackles and are not being held back by them."

Consoles must evolve or they'll go extinct, he warns.

"Consoles have become like dinosaurs heading for extinction as their natural retail habitat begins to change. These ancient beasts must now adapt to a new environment where platforms like Steam, Facebook and Apple’s App Store are pushing innovation. People are already playing more games through digital download than physical media."

"The old fashioned, dinosaur consoles are massively expensive to develop games for, it is like making a small movie. The size of this risk means that publishers concentrate on sequels and “me-too” clones of successful games, thus stifling innovation."

You can't resist change for long...

"In the 1812 the new technology they didn’t like was the mechanised weaving loom. In 1986 it was the CD when they preferred old vinyl music records. Today there is resistance to the idea that physical media, such as DVD, and its retailers will disappear completely and give way to digital distribution."

"Sony, Microsoft and Nintendo’s jurassic machines will have to evolve in the next gen console era. They need to embrace free-to-play and cheaper digital games. If they don’t, they could become extinct, as new giants like Apple and Google takeover," concluded David Darling.

PS3, Xbox 360 and Wii dinos getting creamed by iPhone asteroid!