08 November 2012 | By Marco Fiori
Which one then? For once it seems as though Football Manager has a genuine challenger. No, before you ask Championship Manager hasn’t been resurrected. Instead it comes down to EA’s management offshoot, FIFA Manager.

Yes, that often insulted, supposedly casual football management franchise. Having reviewed both games this year, it seems logical I comment on which is more worth your money. 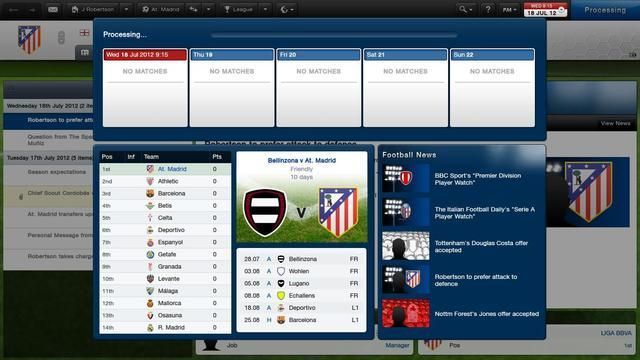 The short answer is an easy one. If you’re a Football Manager diehard, then there’s no choice but to stick to your roots. As explained in my review, the inclusion of Classic, Challenge, Steam multiplayer and a new UI is enough to warrant a purchase. These additions have made 2013 the best in the series yet.

If you’re a purist, it’s Sports Interactive’s incredible attention to detail that pips EA to the championship. That’s not to say FIFA Manager is ignorant and lacking substance. It’s actually the most detailed entry in the series so far and if it wasn’t for the work Sports Interactive had put in, this would’ve been a much trickier argument.

So, why the need for a comparative feature then? If you’re stuck on the fence, choosing the right game is a more difficult choice. On one hand Football Manager keeps you enthralled with its new leaner Classic mode while FIFA Manager prefers to revel in the glamour of football, complete with funky music, FIFA presentation and an impressive 3D engine.

This means the casual demographic has two legitimate options – an established household name in virtual football management or a new kid on a block who’s been getting better every year.

How to compare the two? First, accuracy. Football Manager, despite its lack of Barclays Premier League license, offers the same experience as FIFA Manager 13. Supposedly, Sports Interactive has over half a million players in its database while its rival offers a healthy selection of leagues around the world. Unfortunately, Sports Interactive has been doing its job a lot longer than the FIFA Manager team and have pretty much the entire footballing world available. 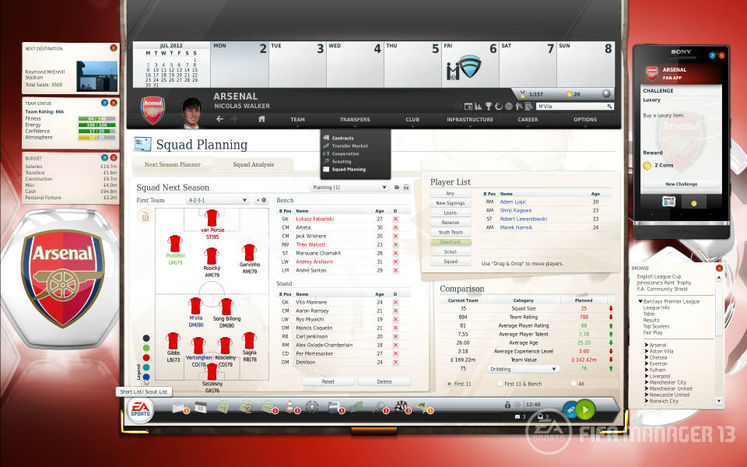 1-0 to Football Manager then? Presentation next – both have their merits, but this particular consideration comes down to personal preference. Do you prefer flashy menus, graphs and visualisation or the more dower, but just as effective, Football Manager approach? Personally FIFA Manager does too much, but I’ve been weaned on a diet of dower spreadsheets.

However for those unsure whether Football Manager is right for them, the counter offer is definitely worth considering. FIFA Manager is the antidote to the sterility of Football Manager. With a more visual representation on show, players get a better gaming experience instead of accounting simulation.

It’s all about the Money

Speaking of money, it’s worth mentioning FIFA Manager’s financial options. If desired, you can take complete control of your club’s economic affairs, right down to the type of paper matchday programmes are printed on. This is something Football Manager has never offered and unlikely ever will.

While it’s easy to argue that financial affairs aren’t the matter of the manager anyway, some players like getting involved as much as they can. Being able to directly influence how your club performs financially is a much more enjoyable experience than seeing your beloved team spiral into debt with no solution possible. 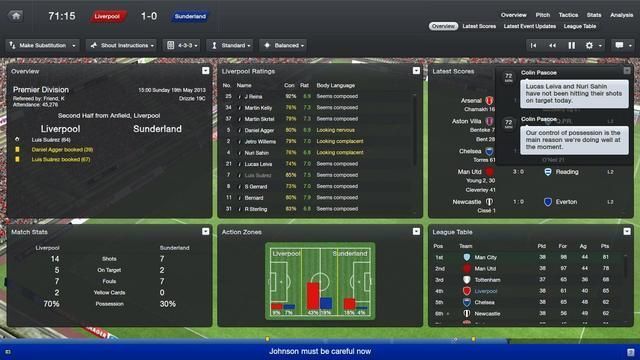 The same goes for personal gain. Football Manager 2013 still presents you with a contract and weekly wage, but aside from an ever-increasing figure, there’s no way to measure your financial ability bar the number on your profile.

Again, some would argue it doesn’t matter, but with FIFA Manager 13 offering you all sorts of stocks, investments, luxury purchases and family considerations, it certainly offers a more rounded simulation experience.

Whether or not this matters to you is again, down to the individual, but the feature set and scope of what you’re able to do at your club alongside the traditional interaction is certainly an important consideration.

This is where the two games collide again and again. Do you like to keep it broad or do you enjoy getting stuck into every little decision? If it’s an on-paper comparison, FIFA Manager 13 wins in this department. It gives you more options, better insight (though often a lot of the information about players and clubs is irrelevant to the decision you want to make) and a wider recreation of football management.

The very fact it includes a Create-a-Club mode shows how focused it is in giving the player what they want. If you’re not a fan of any particular team, why not sidestep the choice and begin building your own. Get the ball rolling with your own creation, complete with custom stadium, kit and backstory.

Then again, Football Manager, despite its sole focus on management (Classic or Career regardless), is the only game to let you get behind the desk of an obscure Chinese club. The research Sports Interactive does is so good it’s no secret that several real clubs license its data base for their real world scouting efforts. 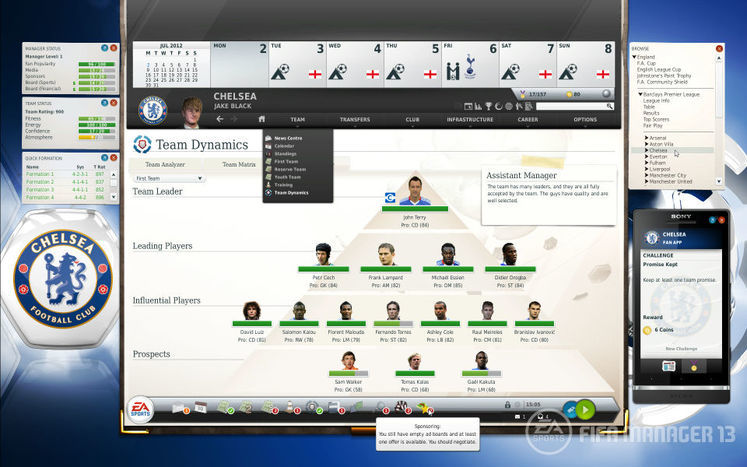 If that’s not a glowing recommendation, I don’t know what is. Here’s the crux – if you like football like your life depended on it, go with Football Manager 2013. It’s incredibly detailed, wonderfully designed and epic in scale. If you want to try something new or lean towards the casual presentation/tone, give EA’s FIFA Manager 13 a go.

Neither game is perfect and both have their own strengths and weaknesses, but hopefully the above overview gives you enough insight to make an informed decision.