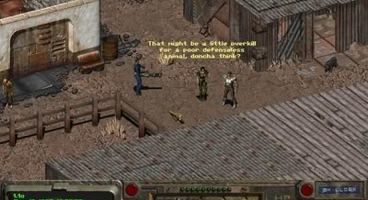 The original Fallout.
The long, vindictive legal dispute between Bethesda Softworks and Interplay over the Fallout-licensed MMO has finally been resolved, as Interplay accepted a $2M settlement from Bethesda's parent company ZeniMax, with each party agreeing to cover its own legal costs.

The settlement comes as financial relief for Interplay, whose budget had been drained by the legal battle, despite the company winning court decisions such as the refuting of Bethesda's claim that the Fallout MMO could not include anything based on the Fallout IP.

Part of the settlement stipulates that Interplay will be permitted to sell the original Fallout, which it created in 1997, Fallout 2 and Fallout Tactics until December 2013. In a related but separate legal case, developer Masthead, which was reportedly working on the MMO, has agreed to relinquish all claims on the IP as well.

"While we strongly believe in the merits of our suits, we are pleased to avoid the distraction and expense of litigation while completely resolving all claims to the Fallout IP. Fallout is an important property of ZeniMax and we are now able to develop future Fallout titles for our fans without third party involvement or the overhang of others' legal claims." said ZeniMax CEO Robert Altman in a statement to the press.

This could mean that Bethesda has their own, unannounced Fallout MMO in the works. If this is so, it seems logical that it could be unveiled during PAX East 2012 or E3 2012. Stay tuned.