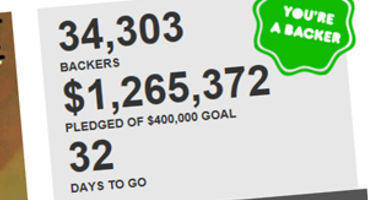 Developer Double Fine is practically frothing at the mouth with admiration for the gamer community as its Kickstarter fund raiser for their new project has exploded with donations.

Their original goal was $400k but that piled up real quick, with Tim Schafer pledging anything more goes toward making the new title more awesome. What about $1.2m?

Kickstarter is a place for Joe public to pledge some cash to help get a project off the ground. Double Fine tried their hand at it and suddenly they're broken Kickstarter records!

"Double Fine Adventure has broken Kickstarter records for most funds raised in 24 hours and highest number of backers," twittered Kickstarter. In just 8 hours they had reached their goal of $400k to start the project up, but within 24 hours they'd broken the $1 million barrier and there's still 32 days left for donations to be pledged.

"We did it! 100% funded in just over eight hours. You people are amazing! But it's not over yet. The number keeps going up and now the question is just how much news do we want to make with this?" blogged Schafer.

"We're getting a lot of attention already and it seems like this little project could have an impact beyond itself."

You can pledge as low as $1 to the project if you wish but should you give $15 then you'll get the full game on Steam when it releases as well as access to its beta. Higher donations will yield even more goodies and someone has already 'bought' a meal with Tim Schafer for $10,000.

"All money raised will go to make the game and documentary better. Additional money means it can appear on more platforms, be translated into more languages, have more music and voice, and an original soundtrack for the documentary, and more!" promised the updated project blurb.