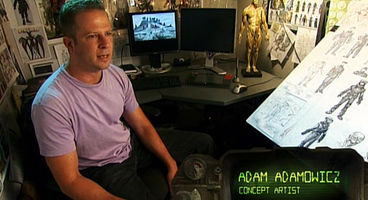 Influential concept artist Adam Adamowicz, whose work included Fallout 3 and The Elder Scrolls V: Skyrim for Bethesda Softworks, passed away on the 8th February. He is credited with giving games like Fallout 3 their unique look through non-digital artwork. Adamowicz died after a long battle with cancer.

When The Elder Scrolls V: Skyrim won the award for Best RPG at the Academy of Arts & Sciences Awards, Bethesda CEO Todd Howard quietly included in his acceptance speech the passing of the artist. According to VP Pete Hines' tweet, "Skyrim wins Best RPG. Todd with a touching mention of our colleague and friend Adam, who lost a battle with cancer last night."

During the development of Fallout 3, Adamowicz posted his thoughts on his role giving Fallout 3 its look in the official game blog, talking about how Syd Mead inspired him on how to make thematic art. "Visualizing all of the aspects of a make believe world is quite an educational experience. On any given day I could be simultaneously learning about multiple topics, from motorcycle engines to 50’s fashion design. It’s kind of like writing and filming a National Geographic documentary film for an actual sci-fi world. For this job, I think the more you read on a wide variety of subjects, the better equipped you are to create depth and realism, especially for a fantasy setting. The fantastic that’s grounded in real world elements and then elaborated and exaggerated upon, seem to work the best, and create a solid jumping off point. This often creates fertile ground for generating additional story elements that can influence costumes, machines, and even motives for the various personalities inhabiting a made up world," he related.

Adamowicz had been working in the videogame industry since 2001, with his first work on the Nightcaster games for the original Xbox.