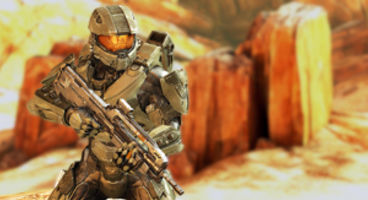 Game Informer has blabbed in their cover story of 343 Industries' Halo 4 and revealed some details about the game's online direction. Multiplayer will relate to single player events.

There's the usual rank ups, but also mid-match weapon drops and medal awards. Spartan Ops is a co-op mode for up to 4 players and will get weekly instalments. These will be free.

New cut-scenes introduce the new Spartan Ops additions that lead to a group of story missions. Both the traditional multiplayer and co-op will fully support drop-in play.

This will make lobby queues a thing of the past and remove the problem of rage quitting. Character progression and unlocks are continuous for both. There's a new competative mode called Regicide which sees the leading scorer made 'King' where the more successful they are the more points they're worth to frag.

As for single player, the relationship between Master Chief and AI Cortana takes the center stage once again, but ultimately it's about Halo's star character making his return to duty. There's a new enemy although the Covenant will be sticking their nose in. Halo 4 will explore a Forerunner plot.

They're a mysterious alien race that wiped out life using the Halos in order to save it 100,000 years ago, which included a dust up with mankind that propelled us back into cavemen times. Developer 343 Industries now employs around 250 members of staff, a notable increase from their initial 30 when they started.