13 September 2012 | By Jonah A. Falcon
Reverb Publishing has announced that it will be publishing Edge of Space, a free-form 2D sandbox terraforming adventure game by developer Handyman Studios, which can best be described as "Terraria in space". The game recently completed its Kickstarter fundraising successfully.

In Edge of Space, the player is one of the unlucky crew of ArkCo, when their ship is lost in the "Bermuda Triangle of space". They wake up from cryosleep finding themselves in the middle of uncharted territory. Players then must explore a dynamic open-world sandbox. While in it, they build, create, craft, and work to survive.

Edge of Space has been submitted to Valve’s Steam Greenlight project; the game's entry can be found here. 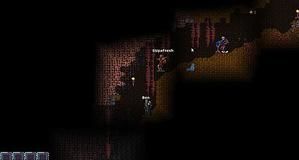