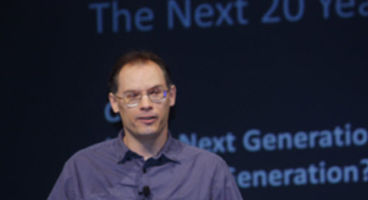 Firing up a console game on TV, "you're in a quiet place," with booming sound around you. Sweeney "certainly don't see one replacing the other," just letting in more types of gamer.

Wait, don't consoles and even TV themselves let you browse the Internet? Yes but they're still shy of accomplishing what dedicated hardware can pull off.

"I see the two things really as complementary. The ability to play triple-A games on a web browser is amazing, and it really opens up the field to go beyond games like FarmVille and create game experiences like Gears of War in a browser. But, the consumer experience is quite different," explained Sweeney.

"When you are playing a console game you are sitting in front of your TV, you're in a quiet place, and you have a booming sound system around you. It's very different than sitting at a computer within a web browser and playing a game that way. I certainly don't see one replacing the other, but just broadening the overall possibilities for experiencing the games."

"That's an interesting prospect," he said.

"A lot of consumer devices that you wouldn't expect now have web browsers built into them, a lot of TVs. I think we're a ways away from the point where they have enough graphics horsepower to play games like Gears of War. If you look at a console, the key thing that they do is deliver a huge amount of computing power in a consumer-friendly form factor."

"A TV might have one-tenth or one-twentieth or one-thirtieth of the power of a console. So, I really don't see that being a substitute for the console game experience - unless you put in a two or three teraflop GPU in there."

Looks like TV manufacturers and platform holders will be playing nice for quite a while longer. Do you think you'll see TVs powerful enough to play games on their own in your lifetime, video gamer? AMD has married CPU and GPU into a single chipset architecture so it's certainly becoming easier to see happening. Do you play browser games?

Check out the full interview between Tim Sweeney and GamesIndustry.biz.