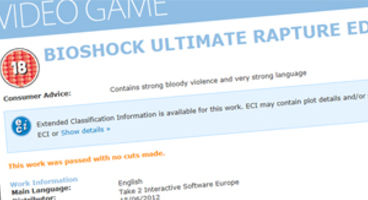 2K Games will be announcing the BioShock Ultimate Rapture Edition which includes the original BioShock and its sequel, according to a BBFC classification; it's 18 rated.

All the DLC will also be bundled into the Ultimate Rapture Edition, as you'd expect. There's no official word from 2K Games yet but we should receive something soon.

Presumably it will be for all platforms. No cuts were made just like the originals enjoyed. The next instalment is BioShock Infinite from Irrational Games, creator of the series.