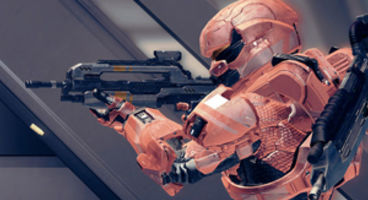 343 Industries is adding their own secret sauce to Halo multiplayer now that Bungie has left the scene. The Microsoft team will introduce specializations to multiplayer's mini-classes.

10 levels of unlocks are provided by each specialization, which include 9 aesthetic armour upgrades. Reach level 10 and you can utilise a game changing modifier.

Only one specialization is available when Halo 4 launches for Xbox 360, which is attached to the Pioneer as you'll earn points faster than others. 343 Industries are mindful of exploits.

"For Fast Track, you only get extra XP for the amount of time you were using it. You can’t just turn it on right at the end of a match and think you’re going to get extra XP for everything you did in a match," said Spartan Ops designer David Ellis, referring to the Pioneer's XP advantage.

"When we launch Halo 4 in November, that’s just the beginning,” he told IGN. “Specializations are just another opportunity to make the play experience months and even years after release feel fresh.” The other mini-classes available to those intending to go online are: Wetworks, Engineer, Tracker, Rogue, Stalker, Pathfinder and Operator.