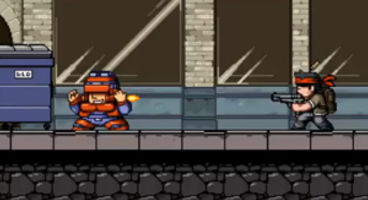 Developer Tribute Games wants to get the jump on their new planned project Mercenary Kings, a 2D side-scrolling action game. A Kickstarter campaign has begun with a top milestone of $200k.

There'll be shooting, looting and weapon crafting in Mercenary Kings, with a "strong focus" on co-op play. We play as King, the "most skilled mercenary on Earth," taking revenge on a crime syndicate.

The game is set on an island located in the Central American Pacific Coast. The crime ring "assassinated your former team members," blurbs the Kickstarter page.

Tribute ask for $75k to meet their minimum funding goal, but they list further milestones further down with $200k at the furthest end of the spectrum. Meeting those milestones adds new features as well as additional bosses, more weapons, and even 4-player online co-op as well as a console version.

Check out the Kickstarter and reveal trailer for Mercenary Kings below.