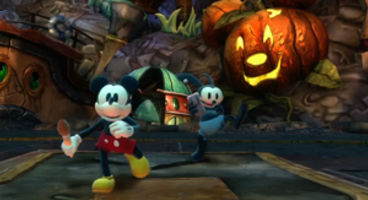 Deus Ex creator Warren Spector describes how player choices have even greater impact in Epic Mickey 2: The Power of Two, which also has a full voice cast and even some Disney style sing alongs.

The team also worked "really hard" on the camera to avoid the major criticisms of the first game. In fact they worked "non-stop" on it since it shipped. Our choices "last forever and can’t be undone."

Spector loves giving players choice and consequence so Epic Mickey has its very own Deus Ex quality because of that. Epic Mickey 2 also features co-op with Oswald.

"Camera, camera, camera! The team worked really hard to enhance the camera system. And when I say “really hard” I mean “really hard!”. I think we did a better job of player direction – knowing where to go and what to do. Games should be about how to do stuff, not figuring out what stuff to do!" revealed Warren Spector on the major improvements.

"We’ve added full voice for all characters, some of whom even sing. We’ve taken the idea of choice and consequence to new levels – your play-style really matters this time around and your choices may have consequences that last forever and can’t be undone," he told the US PlayStation.Blog in an interview.

"Oh, and we’ve added a little thing called two-player co-op. Now, one player takes the role of Mickey, with Oswald as an AI-controlled character, but at any point, a second player can sit down next to you and play as Oswald."

He swears they really have addressed the whole camera situation which proved a major drag for fans of the original Epic Mickey on Nintendo Wii. The first game was a real learning experience for the team. "We’ve worked non-stop on the camera since the day we shipped the first game. We made a ton of code changes – including always allowing manual control of camera, while working to ensure you don’t have to take manual control any more than necessary," he said.

"The level builders – designers and artists – were way more experienced this time around building levels that were less likely to break the camera system. And we just understood the ramifications of changing the world, dynamically, with paint and thinner. Everything’s better this time around."

He touched a little bit on Epic Mickey 2's support for PlayStation Move but wouldn't outright agree that it was the 'definitive' way to play it. This should cheer up a large number of PS3 gamers who prefer their DualShocks.

Check out the full interview between Warren Spector and US PlayStation.Blog. Epic Mickey 2 releases on Xbox 360, PS3, Wii, Wii U and PC November 18th in the US, 23rd in EU. Nintendo's Wii U hits the 18th in case you forgot.