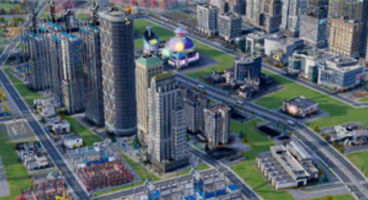 The studio say that the huge city spaces in SimCity 4 inevitably led to huge areas 'copy and pasted' as users applied known formulas of success. Now it's wide open.

"One thing about large cities in SC4," says senior producer Kip Katsarelis during the Reddit AMA, "I often found myself repeating the layout of my city as it grew out. There's basically a formula for where you place buildings and zone to get the right balance." The nature of GlassBox means there's "no "right" way to plan your city."

"It's always changing based on your actions, making that 2kx2k space feel big."

It wasn't a purely design-based decision however as Maxis did try for larger areas but found, given the huge amounts of simulation going on, that technical limitations were rearing their ugly head.

"We had some performance constraints that factored into the decision," admitted Katsarelis. "The difference with this SimCity, there's more to do at the city level and more simulation shared between cities, making the multi-city combinations and play mind blowing." It's the multi-city and in-depth systems that make it, and when combined at "both the city and region levels, it adds all new depth to the game. Don't let the size of an individual city box mislead you, it's a big game."

Engineer Richard Shemaka revealed that each region is restricted to 16 cities due to those same technical limitations, which lead to "client performance" issues if they're any bigger.

"The memory required to store information of more cities," states Shemaka, "and the performance required to show even bigger regions and additional cities is too much. 16 was just the number that met the budget."

Maxis have announced a beta for SimCity although specifics details remain unknown. "Stay tuned for more details, we will be making an announcement in the near future," teased Maxis in the Reddit AMA.