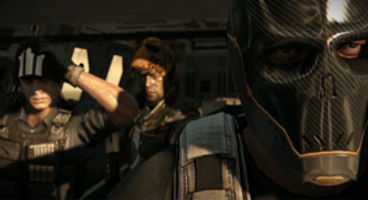 Visceral Games is now handling the next crazy "action blockbuster" outing for the mercenary duo in Army of Two, with the studio acknowledging its charm is a "guilty pleasure" you enjoy on the couch.

This sequel is powered by DICE's Frostbite 2 engine, which means it "just looks good," freeing up the team to experiment and "making a recipe that's unique" from others. Drug wars "are not fun."

The next Army of Two instalment takes place among the "scary stuff" that is the Mexican drug cartels. Visceral aren't going for some "big geo-political thriller" though.

"Having Frostbite 2 meant that I didn’t have to have my rendering team figure out how to get it to look good. It just looks good. They still work on extra features but they’re “extra” features. It means that the creative parts of the game are really what you are spending most of your time on," executive producer Julian Beak told Average Gamer.

"Army of Two is that guilty pleasure action blockbuster that you play on the couch. It’s got some tension of this new setting. You’re in Mexico and drug wars are not fun. That’s scary stuff. You’ve got real tension in who your adversaries are and what the stakes are. It not trivial what you are going down there to do in terms of your mission. But you have the story sets you up there and then it’s all about the characters. It’s really how do they survive through this scenario."

The big change in Army of Two: The Devil's Cartel is all the tension of enemies and being rewarded for having a good co-op partner running and gunning alongside you. The 40th Day featured the two characters back-to-back mowing down foes, but they realised they couldn't over do that in The Devil's Cartel. They decided to make an economy out of it.

"If you do co-op moves, which you did when you were playing the demo, you’ll get enough points and you’ll get overkill. This is essentially as powerful as back to back, but you can do it anywhere you want," he explained.

The points are dependent on "how cooperative you are," Beak continued.

"We’ve seen players who are really good at head shots and really good at killing and run and gun and they don’t earn overkill as fast as player who say…ok, get their attention, you go around… you get something around 4/5 times more points for doing flanks and here’s the thing. Both players get it."

"If you coordinate with your partner and you decide to take all the aggro and getting shot up and moving from cover to cover and then your partner gets three flank kills you share the points are you both worked for them. Your team will get more overkill than the team who plays kinda of FPS, run and gun, Duke Nukem style."

Visceral are introducing a new dynamic duo to Army of Two. "Salem and Rios are still in the game. You’ve got these characters that you know and love or hate depending on which one you identify more with."

"Because you’re in this high intensity environment these guys are going to react in a whole human way and the hope is that you’ll start to identify with these two new characters. As we are moving through the franchise it’s growing up with us so that’s it’s got a real honest feel to it. But it’s a fun feel. It’s still like an action blockbuster. When the action is over these guys are just glad to have survived. But, there will be humour and levity in the game."

Check out the full interview between Julian Beak and The Average Gamer. Army of Two: The Devil’s Cartel releases on Xbox 360 and PS3 in March 2013. The new lead co-op partners are known only as Alpha and Bravo.