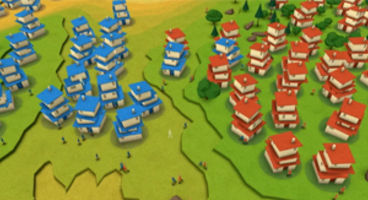 Peter Molyneux and his team at 22cans has just released their prototype trailer for GODUS, which serves as their "proof of concept" pitch for those still sitting on the fence. There are just 3 days left.

The campaign has almost 12,000 backers pledging over £366k. They need just a little over £80k more to reach their £450k goal. Sculpting, building, and punch ups!

The footage from the prototype was built in just two weeks and doesn't reflect what the actual game of GODUS would be. This is purely a mock up to show what 22cans intend.

"Just three days to go until the end of our Kickstarter campaign and it's all hands on deck here at 22cans," began their latest Kickstarter update. "Firstly, let's deliver on the promise we made last Friday in which we said we would show you a prototype in video format, that was not a shaky camera recording."

They have introduced a new reward tier - Patron - that's at the £40 mark. It gives two digital GODUS copies, two beta access keys, thanks in the credits, two in-game pets or familiar, plus everything else in the previous tiers.

They also say that every backer will get an exclusive in-game totem built by their followers, and (optionally) a picture of their choice as a layer on Curiosity. A new wallpaper also suggests they intend different weather cycles.

Check out the Project GODUS Kickstarter campaign for more. Remember to bully your friends with festive cheer to pledge their life savings to GODUS. Will 3 days net another £80,000 for Molyneux and co?