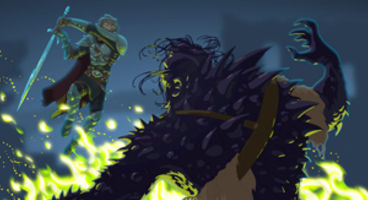 EA and BioWare have decided to repackage their browser-based Dragon Age Legends, which featured on Facebook and Google+, as a singleplayer game free to download and play.

The online aspects of the title were shut down after it failed to meet expectations. However they'll make online character profiles available soon for those who had them.

In order to enjoy this free game you'll need Adobe Air installed. In Dragon Age Legends we control a small party, go adventuring, battle foes and manage a castle of our own.

“If you have played the online version of Dragon Age Legends on either Facebook or Google+, you will soon be able to download your character as a Saved Game and continue playing in the single-player game," announced the official website. It originally launched to compliment Dragon Age 2. The game weighs in at 170MB.