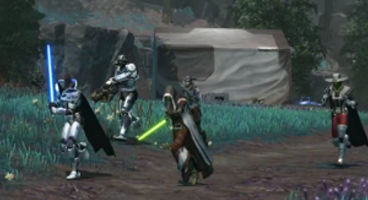 A new analyst report from Cowen and Company remark that the decline in Star Wars: The Old Republic subscription figures are "most likely due to a lack of 'end-game' content".

The recorded 1.7 million users in February for SWTOR will fall to around 1.25 million, forecast analysts. EA focusing on end game content but momentum "appears to have stalled".

People are reaching the end of the game in terms of content and losing interest, says Cowen and Company, and EA aren't keeping up. Overall the publisher's fiscal outlook is rosy.

"We believe that the apparent decline in subscribers is most likely due to a lack of 'end-game' content for the title, meaning that players who hit the level cap have few compelling options in terms of ongoing game play," said Doug Creutz.

"While the game got off to a good start, the relatively light amount of end-game content does appear to be taking a toll," continued the Cowen and Company analyst. "We believe EA is attempting to address the end-game content issue, including a recent major game update, but momentum appears to have stalled and we believe it is prudent to adopt a more conservative forecast on subscribers at this time."

EA Sports, PopCap and digital sales are providing the big publisher steady revenue. This gives BioWare the breathing room to keep on Star Wars: The Old Republic with new content without fear of pulling the plug.