21 March 2012 | By Jonah A. Falcon
Capcom has announced that their platform action title World Gone Sour will be "sweetening" PlayStation Network on the 10th April and Xbox Live Arcade on the 11th.

The game is based on the Sour Patch Kids candy, as players take on the role of candy pieces that go on a long, arduous journey to the ultimate destination: the human stomach. Players will guide the heroic candy piece through unique locations such as the sticky floors of a movie theater. Players will deal with solving puzzles while jumping and twisting through obstacles.

The XBLA and PSN versions will allow local co-op play, along with support for online leaderboards and Microsoft Achievements and PlayStation Trophies.

Check out the official trailer in the video below. 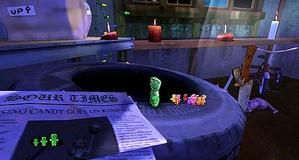