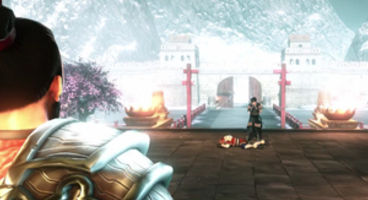 Kostas Zarifis, formerly of Lionhead Studios, is creating a motion controlled title Kung Fu Superstar. We play as a martial arts fan Danny Cheng who's desperate to be the next Bruce Lee.

We'll be learning real Kung Fu moves in a dojo before striking out at Hollywood film sets. No platform is announced but Zarifis worked on Kinect's Fable: The Journey.

Kinect also offers the best method to practice those Kung Fu moves without accidentally letting a motion controller fly out your hands. It's for "real gamers" says Zarifis.

Kung Fu Superstar won't demand you have a motion controller though as a standard pad will be fully supported. "We're trying to be innovative with this game across many different fronts," Kostas Zarifis said. "We think no-one's solved the problem of enticing true gamers to the motion control platforms. That's a multifaceted problem."

"It's also the way developers are asking traditional gamers to take that leap. Suddenly you have this massive new thing and a massive shift into interacting with your games. Instead of going, how about you try this bit by bit, and you can still use everything you know from the past and used and loved, which is your controller, but maybe you can try this as well."

"We think it should have been done in smaller steps, rather than going, now you have to use this."

Kung Fu Superstar is for real gamers who like God of War and Assassin's Creed, said Zarifis, as it's a fighting game for the hardcore player. There's no casual crowd brown-nosing here. "It's a game for gamers who like their challenge, depth and sophisticated mechanics," he continued.

"Effectively it's a fighting game. It's a game much like God of War or Assassin's Creed. The only difference is the combat system in the game is real Kung Fu. So instead of pressing X to do a punch, you have to use x Kung Fu technique to do that technique physically." The Kung Fu Superstar game was pitched internally at Lionhead Studios.

While it gained some attention, including the eye of Peter Molyneux, it wasn't going to get the go ahead and so Kostas Zarifis left the developer to follow his idea. "Lionhead is very much a Fable-oriented studio," he remarked.

"It propagated to quite high up but it was obvious it either wasn't going to happen at Lionhead or it would take a long time. I was in very close discussions with Peter Molyneux about the whole thing. He loved the idea and the project. He was a big supporter."

"When you're part of Microsoft it's like you in a large fleet. If suddenly somebody says they saw land, you can't turn the whole fleet to go that way. If you're willing to put your money where your mouth is, you jump on a lifeboat and see if there's actually land there."

"People were quite open. Lionhead has a very creative background. They really foster their creative people, be that inside of Lionhead or outside of Lionhead. So since the opportunity was there for me to go away and shape it exactly as I wanted it to be, and then potentially show it back to whoever, I just decided I'd go ahead and do that."

Zarifis partnered up with Alasdair Martin and Anish Antony to form his new development studio. There are about 15 developers in satellite on the project. It's his fond hope that Kung Fu Superstar can help sell motion gaming to the hardcore crowd by not forcing the motion component but by teasing it as an option.

Check out the announcement trailer for Kung Fu Superstar below. Xbox 360 looks a sure bet.