25 April 2012 | By Jonah A. Falcon
Black Bean Games has announced that a demo is now available for developer Milestone's MUD: FIM Motocross World Championship on PlayStation Network. The game will be available on the 4th May for PC, Xbox 360 and PlayStation 3.

MUD: FIM Motocross World Championship claims to be the only videogame that three all three professional motorcross competitions, including the MX1 and MX2 championships as well as the Monster Energy FIM Motocross of Nations. The game will feature 12 Grand Prix races, official track locations and six huge arenas for freestyle stunts, complete with varying terrain conditions. 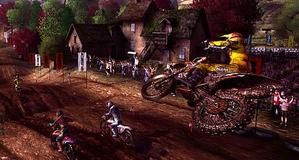