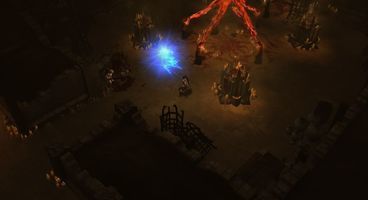 Last week, Blizzard revealed some of the major changes and cuts they'd made late in their development of Diablo III. Apparently, they haven't stopped slashing features, as it has been announced that they've axed companion pets and scrolls of reforging.

Regarding the pets who would run around and pick up gold for the player, Blizzard community manager Nethaera wrote in the official forum, "The companion pets felt like they were mandatory to maximize play efficiency and some of the pets were too cutesy for the gritty, dark world of Sanctuary.”

In other words, they were too cute and cuddly.

As for scrolls of reforging, they were "underdeveloped and just not quite good enough for the game in their current state."

“Neither of those are issues we felt like we could solve without a lot of additional work, and we’re trying to close in on a solid release date for the game, not move further away,” Nethaera added.

Diablo III still has no release date save a nebulous 2012 release.