28 August 2012 | By Jonah A. Falcon
One of the most exciting indie games, Chris Hecker's SpyParty, has gotten a drastic upgrade in the visual department, thanks to EA/Maxis senior artist John Cimino. The blocky party guests will get a radical facelift.

How radical? Check out the "before" and "after" shots of the guests. 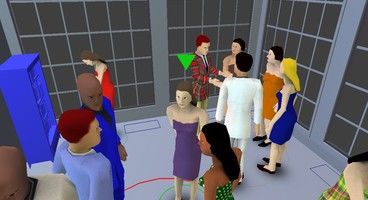 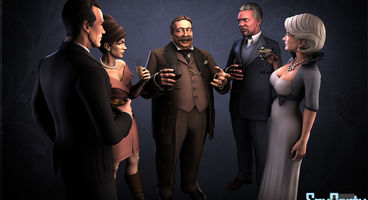 According to Hecker, "We really wanted the art style to reflect the same level of subtlety that the gameplay has. I didn't want it to be too realistic or too exaggerated, and I think we hit it on this really nice, call it naturalistic or illustrative - they look like illustrations. I'm super excited."

SpyParty can best be considered a reverse Turing test which those who play the multiplayer component of Assassin's Creed are familiar with. One player is a spy, the other is a sniper. The spy must complete his objectives in a crowd of AI party guests without the sniper being able to identify him. In other words, the spy must blend in and appear to be AI-controlled.

Hecker figures he will have 20-30 Clue boardgame-styled characters by the end of development, with environments that match their style and personality.

However, gameplay won't take a back seat to the graphics. "Gameplay is by far the top priority," Hecker promised, adding, "If for whatever mystical reason I can't change the art at all without totally f---ing up the gameplay, I will ship the current art. I do not think that will be necessary though. I think that we can make a beautiful game both design-wise and visually." 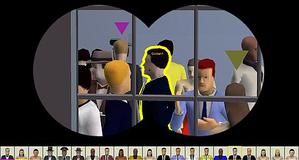