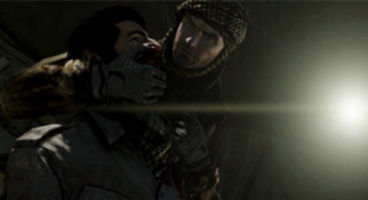 Ubisoft's Splinter Cell: Blacklist director David Footman has accepted the problem behind criticisms for the game is that little has been communicated. They're "kneejerk reactions to a vertical slice" of it.

The team "have to be patient" as they gradually "roll out each item" of Blacklist. Footman says they "really need to get a demo out" to actively prove the gameplay is 'a lot more diverse'.

PR just hasn't landed what Ubisoft are doing with Blacklist, he argues, and that it also has to fight the problems of the past in the series. Many weren't in favour of Conviction.

Back at E3 a rather visceral and violent scene from Blacklist was showcased which involved a particularly brutal interrogation scene. “Everyone can make kneejerk reactions to a vertical slice of the game that are really uninformed as to what the whole experience is like,” said David Footman.

“We really have to be patient as we roll out each item about the game.”

“The proof is always going to be in the pudding. Talk is talk, and it is just all talk right now. We really need to get a demo out there, for people to see how you can ghost levels, to see the gameplay. It seems to be an overreaction because people are just seeing the ‘pow!’, the explosiveness.” The E3 footage was there to provoke reaction.

"What we showed at E3 was very explosive, very violent. That kind of stuff tends to get shown, but as we roll out different aspects of the game you’ll see a lot more diversity and lot more of what hardcore fans are expecting to see.”

Footman added: "What people won’t say, but what they’ll dance around, is that is the price of freedom to protect Americans and their sedans and SUVs.”

"If it makes you squeamish and uncomfortable, maybe that's the point. I always know when we're onto something that's really touchy and interesting when we get reactions like that. But the truth is it's really happening. That's the truth. We all know it's really happening all over the world. People are doing horrible things for - what, the right reasons?"

"Where do you draw the line? What would you do to save your country when all it took was to torture someone using the wrong means? We feel it's an interesting dilemma for the player."