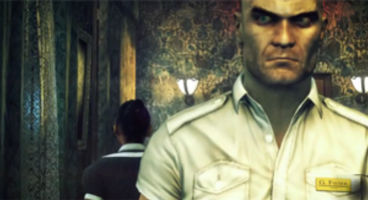 Developer IO Interactive have included multiplayer in Hitman: Absolution, but it's not what typically constitutes online play. Instead gamers define 'Contracts' which are then shared as challenges.

However the "broader sense" of online play is always "tempting to investigate," admits the dev team. Gameplay director Christian Elverdam believes people will be "looking for social connectivity."

There's no definitive online or offline answer for the future direction of the games industry, but Elverdam feels connectivity through social networking is key.

"The broader sense of synchronised multiplayer will always be tempting to investigate,” he told Eurogamer. "If you look at the games industry right now, there’s no silver bullet game saying: ‘only multiplayer games from now on!’ or ‘only single-player games’. I think The Elder Scrolls is an example of game that did very well as a single-player game.”

“If you look at the future I think players will be looking for social connectivity.We want to see what our friends are doing. Even if you’re a single-player guy who doesn’t like twitch-reactions or synchronised multiplayer.”

But, he continued, “there also exists a group of people who like to take things at their own pace. In Hitman there’s obviously a story, but it’s also about playing around with the AI. And that can be a real single-player experience.”

"We have a legacy with Hitman that's unique - it's this contemporary social stealth sandbox," said Elverdam, and Contracts is "a way of sharing your creativity, in a morbid sense. It's actually inspired by the fans who started do this with Hitman: Blood Money, writing on forums saying 'what if this guy was the target?'"

"So, Contracts is a multiplayer mode if you like, but also a social mode. It's kind of like a YouTube channel, you can use it to show off." Hitman: Absolution releases on Xbox 360, PS3 and PC November 20th.