28 November 2012 | By Jonah A. Falcon
Sony Online Entertainment has announced that the nineteenth expansion for the venerable MMO Everquest is now available.

The new expansion, Rain of Fear, continues the storyline from House of Thule and Veil of Alaris, after players have released the stolen power of Fear. This has resulted in the power returning to Norrath in the form of crystalline shards falling from the sky.

* Level cap increase from 95 to 100 - Players can now achieve a new max level of 100 and set a new standard of gameplay.

* Collection System - Players can discover items throughout Norrath and collect sets for exciting rewards and titles.

* Improved Brokering System - Players can now sell items in the Bazaar while being offline! More flexibility as a buyer to search and purchase from anywhere in the world.

* New Linear Item Progression - Stats on armor collected will increase as players move up from one tier to another.

* Customization with Non-Visible Armor - All non-visible armor in Rain of Fear can now be worn by all. Players can customize their stats for every encounter.

* Class-specific Stat distribution - Players can now collect items that are designed specifically for each classes' abilities. 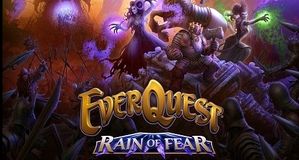